One of my favorite aspects of the Bitty Baddies series is the research. While creating them, I’ll make it a point to learn all about them. Specifically, I like to learn their back story. Who where they before they were villains? What about their journey twisted them?

Nebula and Gamora’s back story is well established in the Guardians of the Galaxy movies. As one of four sisters I can relate to the sibling rivalry. My piece “Children of Thanos” Gamora and Nebula have just battled. Gamora has once again triumphed over Nebula. As the story goes, for every defeat Thanos replaced Nebula’s limbs with bionic upgrades. The process is painful so you see little Nebula try to slink away as the shadow of Thanos falls over them.

The composition is inspired by Maragret Keane’s “Steep Climb” painting

Ursula of The Little Mermaid has a very vague back story of her being the outcasted sister of King Triton. It was less than inspiring so I imagined one of my own. 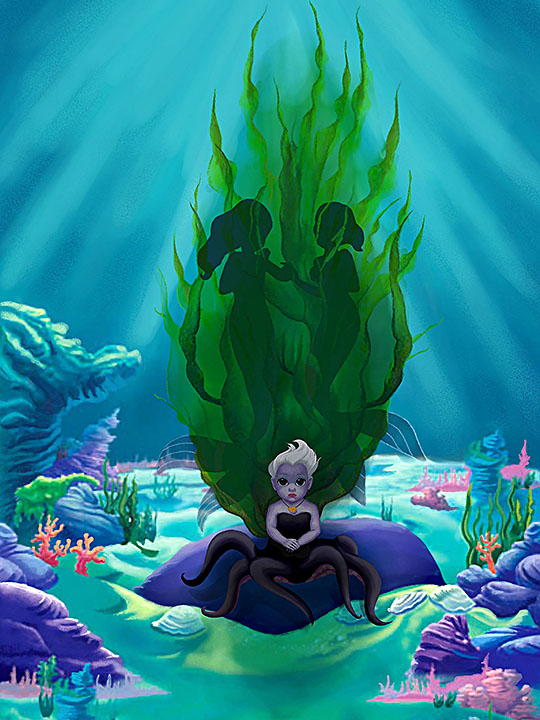 What if Ursula was a product of mean girls.. ahem, mermaids? She’s half octopus (cecaelia) in an ocean full of mermaids. Fish aren’t known for their intelligence, but octopi are. Perhaps on some level, the mermaids were jealous, and made it their mission to take her down a peg. Bullies beware! Your actions have long reaching consequences. One day you and your children may end up “poor unfortunate souls”!

Margaret Keane often painted big-eyed children with their big-eyed pets. The portrait’s composition above of Team Rocket (James, Jessie & Meowth) was inspired by Keane’s “Children in the Alley”.

My son Judah is currently Pokemon crazy so this is one I did especially for him.

The graffiti murals where photoshopped in after the image was drawn on an iPad Pro. See the right here and the left here in their original form.